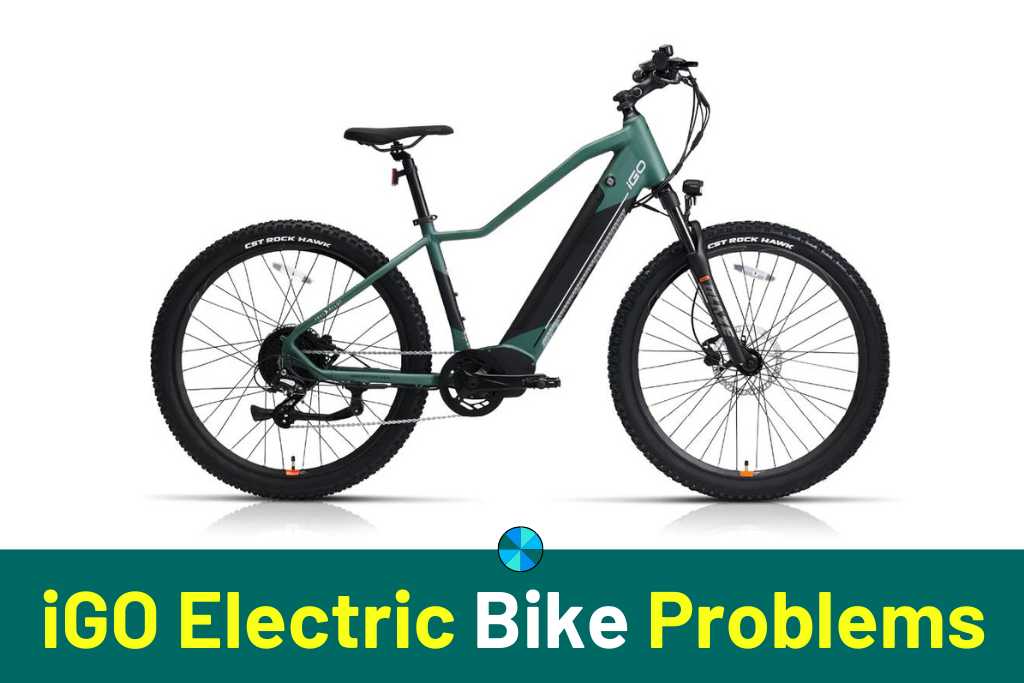 Do you know what the main problems with iGO electric bikes are? Well, you are at the perfect place to find the answer to such a question.

Advertised as a sustainable alternative for commuting, electric bikes from companies like iGO have been trending in popularity.

If you are in the market for an e-bike you may be wondering what are 3 common problems with iGO electric bikes?

Electric bikes often come with several problems you would not experience with a manual bicycle. Problems that customers report having had with iGO electric bicycles in online reviews include problems with the throttle, battery failure, faulty controllers, and easily broken front cranks.

Let’s dive in and take a closer look at some of the key issues that come up with iGO electric bikes.

What is an Electric Bike?

Let’s start at the very beginning. An electric bicycle, or e-bike, is a bicycle that comes with an electric motor that assists with momentum.

E-bikes utilize rechargeable batteries which help power the motor along with functional pedals, although there are some that offer a throttle for a “power-on-demand” option Most electric bicycles can get up to 16-28 miles per hour depending on the make and model.

Electric bicycles are great alternatives for people who want to start riding or ride long distances without the physical strain of a manual bike.

Electric bikes allow riders to get to where they are going faster than manual cyclists and studies have shown that e-bike riders still receive the same health benefits riders get from manual cycling.

What is an iGO Electric Bike?

There are several electric bike sellers across the world, iGO being one of them.

iGO Electric has been selling and designing electrical bicycles as one of Canada’s major electric bike companies.

iGO’s website states that the goal of the company is to develop high quality electric bicycles at a price that is affordable.

iGO not only manufactures bicycles but also has developed a mobile app that can be connected to their bikes.

The mobile app can keep riders aware of their bike’s speed, assist level, and battery reserve in addition to other e-bike features.

There are several issues that can arise with any electric bike—issues with the chainstay motor connection, broken throttle, faulty brakes, and motors that halt and stop spinning.

We reviewed several negative reviews from iGO bike users and compiled the most common issues identified by customers below.

While electric bicycles have many benefits both for health, overall fitness, and contributing to a more sustainable environment it is always important to do extensive research more making a commitment to purchase a particular make or model.

Use what you have learned here to kick off that process. Be sure to do additional digging to ensure you find an e-bike that is perfect for you!

According to the website Electricbikereview, customers have experienced battery failure with the iGO electric bicycle Metro Ergofit model.

The reporting customer experienced an instance in which their iGO e-bike would not turn on.

The battery is a common report failure with e-bikes, not just ones from iGO. As the most integral piece of an electric bike, it is one of an e-bikes features that are most likely to suffer damage or issues due to using.

While the customer did not report what the underlying issue with the battery was, there are a couple of possibilities.

Sometimes e-bike riders may accidentally leave their batteries on for an extended period of time, causing them to drain to the point that they can no longer be recharged.

Because of this, it is recommended that bicycle batteries should be removed when the bike is not in use.

Batteries can also experience damage due to the elements. Extreme heat or cold can result in a significant decrease to the battery’s life. Make sure you always protect your e-bike from severe weather as best you can!

Another issue that has been reported by iGO e-bike customers is problems with throttle.

The throttle is the part of the electric bike that help propel the bicycle forward. Typically issues with the throttle system are caused by improper use from the rider.

Engaging the throttle with too much force can put a strain on the wiring that allows the throttle to operate.

Engaging the throttle with less force may help avoid any damage to the throttle’s wiring and mechanics.

Customers have also reported issues with the controller when using their iGO electric bikes.

The controller is vital, connecting all the main components of the electric bike. It helps transfer battery power to the rest of the machine to get the bike running.

Controllers can run into several issues including damage to the internal power source and extreme heat or cold caused by severe weather.

While any type of extreme element can cause damage to the controller, overheating is typically the main perpetrator.

There are other issues that could potentially impact any electric bicycle including iGO e-bikes.

The motor is a critical component of any electric bicycle that can cause issues if the bike is not maintained properly.

Motors on electric bikes have been known to cause an irritating noise due wear and tear on the brakes, bearings, or gears.

Electric bikes can also run into issues with external wiring. To avoid any damage to the bike’s wiring it is good to have the bike regularly checked up and to maintain it make sure to not cause any undue stress or movement that has caused any harm to the wiring.

It is important to research the types of issues that can arise when using an e-bike, which brands are best, and whose products are most likely to avoid these problems.

So what are the 3 common problems with iGO electric bikes? From our research, we noticed instances of three key issues that arise–issues with the controller, throttle, and battery.

While these were the most commonly stated issues with electric bikes among customers who posted questions or complaints online, it is also clear that these are issues riders experience with other common types of electric bikes too.

link to 5 Common Problems With Evelo Bikes (Do This Before...)

According to a fair number of consumers, Evelo has one of the best customer service departments in the world. Unfortunately, many have less positive things to say about their e-bikes. But what are...

Electric bikes are incredible machines that make getting around town easier and better for the environment. Carrera has been making bikes for over 25 years and recently got into the ebike...