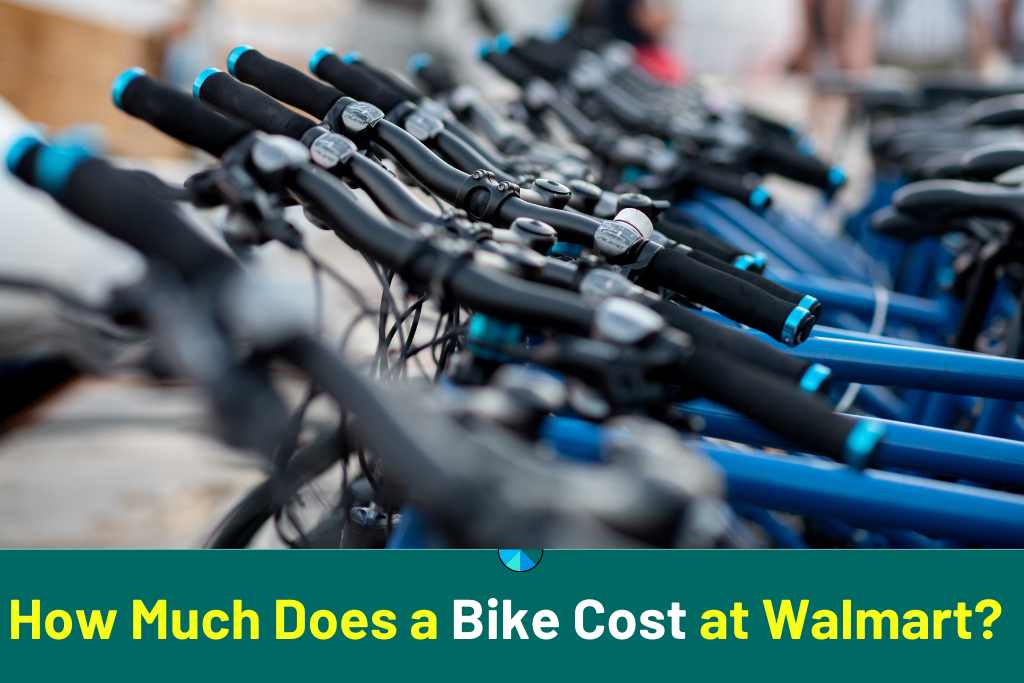 John, do you know how much a bike cost at Walmart? This is one of the questions my readers ask a lot. Well, I´ve got you covered.

The cost of living increases every day, which means daily expenses such as food and fuel are going up and up every day.

This is why when faced with a cost-saving measure such as riding a bicycle instead of driving, most people jump on the opportunity. But how much does it cost to buy a bike from Walmart?

Walmart sells adult bikes for as low as $98 and as high as $498. Electric bikes drive the price even higher, reaching up to $3,000 for one unit. Kids’ bikes, on the other hand, can be as cheap as $38 and goes up to $250. As with any product, the number of features available on the bike drives the costs higher.

Although the price range might seem as if it’s varying wildly, it’s easier to get an average depending on the kind of bike you’re planning to buy. Let’s learn more about the price ranges of each bike type.

How Much Does a Bike Cost at Walmart?

Walmart might not be anyone’s first choice when shopping for a bike, but their constant price rollbacks and ubiquitous presence make them a good option.

Where else would you find a kid’s bike for less than $50, just in time for the little one’s birthday?

Bikes from Walmart can range from $38 to $3,000, which can make planning overwhelming. To better help you decide what kind of bike you can get with your budget, let’s look at some of the most common bike types and their respective price ranges.

Read also >> How Much Does A Cheap Bike Cost? (Average Value)

Read also >> How Much Does a Kid Bike Cost? (All You Need To Know)

Read also >> How Much Does a Bike Tire Cost at Walmart? (Saving Tips!)

Walmart carries a large variety of mountain bike brands, such as Schwinn, Mongoose, Kent, and Huffy. Most of them are 26-inch bikes, with a few 24-inch and 29-inch sprinkled in the mix.

Lower end models can be as low as $128 when not on sale, while higher-end bikes can go all the way up to $698. Some brands can be as cheap as $98 when there’s a price rollback.

Cruiser Bikes seem to have an average price of $168, with most models from Huffy making up the majority of Walmart’s selection.

If you have a larger budget, Walmart also carries bikes by Micargi or sixthreezero; these brands cost of $418 and $498, respectively.

For a mid-ranged budget of about $200 or $300, the store has a selection of Kent and Huffy bikes.

Because of the technology involved, electric bikes start at a higher price point than others.

When there isn’t any sale, the lowest prices you’ll find start at about $648, but prices do go down to $398 if there is a price rollback ongoing.

The average price for Walmart’s electric bikes seems to be between $648 to $798, and with a good variety of brands, too.

The most expensive bikes can go as high as $2,999 for a 9-speed bike. Mid-range bikes are available for just over $1,000, and brands include well-known names such as Schwinn.

The brands do vary, which include names such as Kent, Hiland, and Eurobike.

If you want a well-known brand or just want to pick a bike in the middle range, set aside a budget of $500.

However, Walmart’s higher-end road bikes don’t seem too expensive either, with the most expensive model only costing $879 by Decathlon.

If your budget is $300 or less, then Walmart has quite a sizable collection for you. Their most inexpensive bikes are as low as $129, while most brands are between $228 to $298.

If you’re able to add another $50 to your original budget, then you can access brands such as Schwinn.

On the higher end, Walmart offers commuter bikes that are in the $500+ range. These bikes have extra options such as a rear cargo rack or multiple speed selections.

And if you want the most expensive commuter bike they have, that will set you back $1,198.

In the market for adult BMX bikes? As expected, Walmart has quite a few of them available as well. A budget as low as $200 can get you a decent bike, such as the Mongoose BMX Freestyle Bike with 20-inch wheels.

If you’re able to add another $100 to your budget, you’ll be able to browse Walmart’s mid-range offerings, and doubling your budget to $600 will bring you close to their most expensive offering – Eastern 20-inch Element Freestyle for $669.99.

Kids love to ride bikes too, and Walmart has no shortage of them in stock. When on sale, they can be as cheap as $38, but their regular price of $58 isn’t too expensive, either.

And if your kid is still learning how to ride a bike, Walmart also sells ones with training wheels still attached.

Feel like splashing out quite a bit for the child? Walmart’s most expensive bike is $250, which is the Huffy 24-inch Boys’ Mountain Bike.

Walmart doesn’t offer a bike assembly itself; instead, they’ve partnered with a company called “Angi.”

According to Walmart, Angi taps into its contact network of local professionals so they can connect you with someone right away.

The professional mechanic will then schedule a visit with you to help with the bike assembly.

However, the cost associated with this service can prove to be quite pricey for some. For example, Angi charges $79 for an adult bike assembly, except for complex ones such as mountain and electric bikes.

Angi even offers kids’ bike assembly services for $59, which can be more expensive than the bike itself.

Can You Buy a Pre-Assembled Bike From Walmart?

If you go to a physical Walmart store instead of ordering online, there’s a chance you’ll be able to buy a pre-assembled bike.

Walmart’s bike section has a display of multiple bikes already assembled, and you can buy them as they are. Of course, the model you want isn’t guaranteed to be available on display.

When shopping for a new bicycle, you should definitely include Walmart as one of your options. Their big box retailer status ensures a wide selection of bikes, and they can cater to budgets of all sizes.

What’s more, the number of Walmart stores around ensures that you can visit multiple stores before committing to one brand.

As long as you include the assembly fee in your budget, Walmart may not be a bad choice when buying a new bike.

Have you ever asked yourself or your friend what Walmart's online bike return policy is? Well, you are at the perfect place to find the answer to such a question. While Walmart is a great place to...

VIEW POST
link to How Much Does a Bike Tire Cost at Walmart? (Saving Tips!)

Do you know how much a bike tire cost at Walmart? Well, you are at the perfect place to find the answer to such a question. Walmart sells thousands of products at its superstores, including bike...