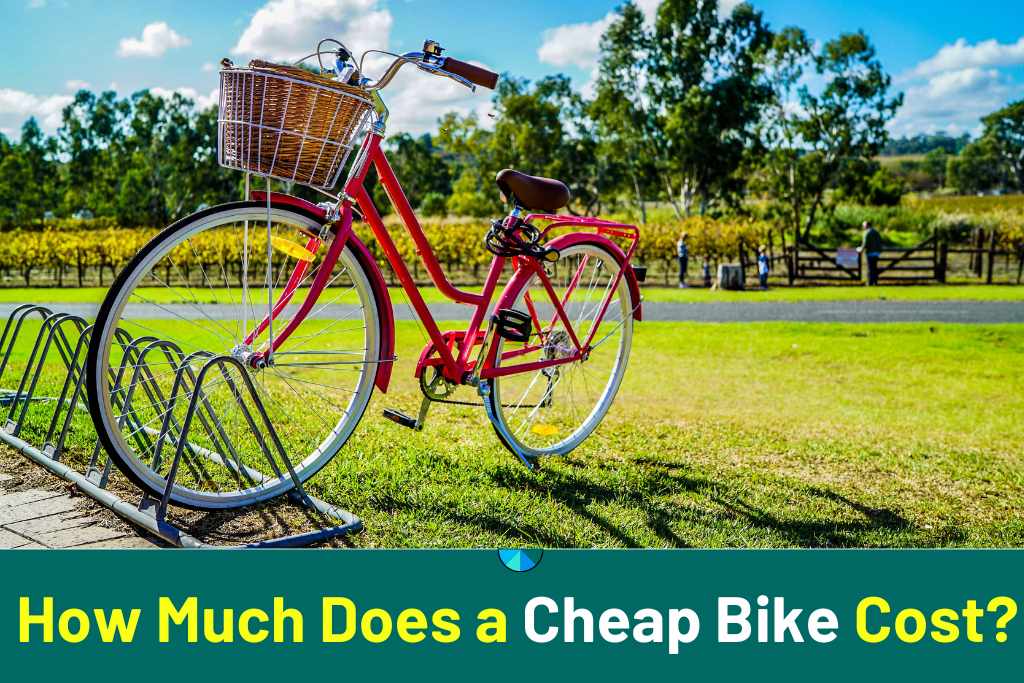 John, do you know how much a cheap bike costs? This is one of the questions my readers ask a lot. Well, I´ve got you covered.

Depending on the point of view, i.e. what exactly you are looking for or at, a bike can be either inexpensive or very expensive. Some pro race bikes cost more than a decent used car, but how much does a cheap bike cost?

The cheapest adult bike can cost as little as $150, but such bikes can suffer from many issues. But, good quality cheap bikes range from $200 up to $1,000, depending on their type.

Not all bikes are made for the same riding conditions and terrain types, so their prices vary. But let’s get on with more details.

How much does a cheap bike cost?

As we’ve said above, a “dirt cheap” new bike can be as little as $150, and this applies to all types of bikes.

But though such a bike has the lowest upfront costs, it can be so poorly made that it doesn’t last you more than a few months of occasional riding.

If you want to actually enjoy a bike for a bit longer, then you should spend a bit more. And depending on the type of bike, cheap but decent quality range between $200 and $1,000.

Read also >> How Much Does a Kid Bike Cost? (All You Need To Know)

What makes the bike price

Generally speaking, the difference between a decent cheap and expensive bike is the ability to finely adjust them for different riding conditions.

Fine-tuning is very important to get the maximum out of a rider’s abilities, and outside of competitive cycling is unimportant.

Another area where bikes can get very expensive is the materials used. Expensive bikes use some very exotic materials, like titanium and carbon fibers to cut down on their weight.

But for casual riders, those are usually not needed.

The frame is arguably the part that makes the most difference in price and quality between dirt cheap, cheap decent, and expensive bikes.

And also, can cause most of the problems with the cheapest bikes. Expensive bikes use exotic materials to make them lighter, but the difference between good and the bad cheap bike is the consistency of frame production.

Good cheap bikes use steel or aluminum frames, but they are well-made, straight, and properly aligned. Something not always present on dirt cheap bikes, and which gets them completely out of whack.

Rim brakes, mechanical, hydraulic, electric shifters, and so on are the parts that can quickly add to the bike’s price.

To a casual rider, the more expensive and advanced options do not add much value. More expensive components are usually made to withstand extreme forces, such as 6 feet jumps, and probably you do not need that.

Most of the bikes are still made by hand, and while carbon fiber forming is very labor intensive, when it comes to cheap bikes the craftsmanship of workers who weld the frame makes just a fraction of their price but has a huge impact on their quality and longevity.

A slightly more expensive bike can be a much higher quality product.

Getting a bike to your doorstep from the other side of the world is much more expensive than from a neighboring country.

This is why there could be a huge difference in quality between two cheap bikes in the same price range.

Importers, distributors, and retailers; all of them have to earn on the sale of a bike. So, the more hands a bike passes through more is added to the price of a bike.

Big brands spend a lot on the marketing of their products, and those expenses need to be recovered somehow. Usually, it is done by simply raising prices in comparison to less big brand names.

How much does a cheap road bike cost?

A decent road bike will cost you between $300 and $600 and will feature an aluminum tubing frame with internal cable routing, and tube butting in critical areas for increased rigidity.

How much does a cheap mountain bike cost?

Decent mountain bikes, which you will not dread taking out on a rough trail for the frame fragility will cost you from $800 upwards.

But these bikes are made to be very robust, and quality suspension and frames come with a price.

How much does a cheap kid’s bike cost?

Kids’ bikes are usually intended to be used one summer and then thrown away. Especially for kids under 10 years of age. Which is why their prices start at around $120.

How much does a cheap electric bike cost?

A cheap electric bike that will not become a single-speed bike after a single ride will cost you around $900 and still come with a lot of limitations.

How much does a cheap hybrid bike cost?

Hybrid bikes are good for casual road use, but also some gravel and dirt cruising. A decent quality one will cost from $500 and up.

How much does a cheap cruiser cost?

Beach cruisers are bikes that are intended for leisurely slow rides along paved bicycle trails, and they are required to be simple and just straight built. This is why they are the most affordable with a starting price of just $200.

How much does a cheap folding cost?

Folding bikes do what their name implies, can be folded in half for easy storage, which makes them a very popular short commutes bike.

But the folding mechanism needs to be very sturdy, so a decent cheap one costs from $300 up.

Can cheap bikes be expensive?

A cheap and not properly built bike can very quickly become very pricey in terms of repair expenses.

Sometimes making a $50-$100 saving can mean a couple or more hundred dollars in repairs over its life span. And that is if it doesn’t have some catastrophic failure such as a cracked frame.

How much a cheap bike cost is not an easy question to answer. Dirt cheap bikes can be a bigger expense than decent ones, and some types of bikes are required to be of certain quality just to be called entry-level.

In the end, a decent $400 bike can last you a decade, while over the same time you could end up buying half a dozen or more $150 bikes.

link to How Much Does a Bike Tire Cost at Walmart? (Saving Tips!)

Do you know how much a bike tire cost at Walmart? Well, you are at the perfect place to find the answer to such a question. Walmart sells thousands of products at its superstores, including bike...

VIEW POST
link to How Much Does a Kid Bike Cost? (All You Need To Know)

Learning to ride a bike and enjoying the outdoors riding around is something that many children adore, but it's not always affordable. So much should you expect to pay for a kid's bike? The cost...