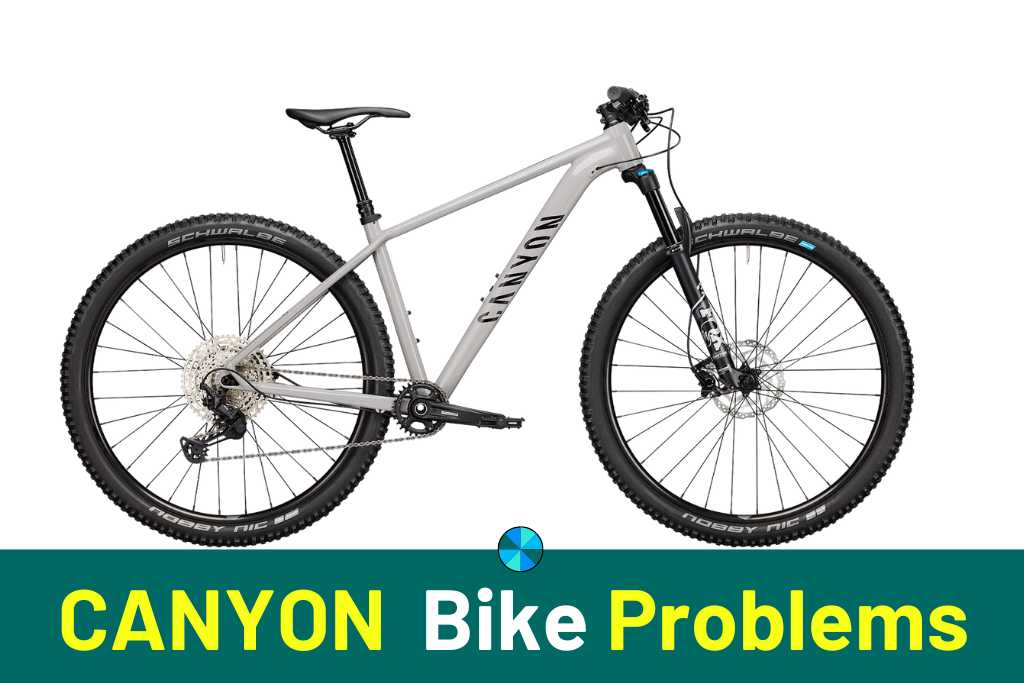 Do you know what the main Canyon bike problems are? this is one of the questions my readers ask a lot. Well, I´ve got you covered.

There are quite a few big names in cycling so it can be hard to tell which company to choose when you’re shopping around. Canyon Bikes is a very well-known brand, but are their products up to scratch?

In this article, we’re going to investigate the most common problems that people have with Canyon Bikes so that you know exactly what you might be getting yourself in for when you make a purchase.

What Is Canyon Bikes?

Before we go into the problems that consumers tend to find with their bikes, let’s get a quick overview of the company itself.

Canyon is a German manufacturer that produces bikes of all kinds. Their bicycles have featured in many professional competitions over the years, and they have even sponsored a number of successful cyclists.

Canyon bikes started life in 1985 when two brothers, Roman and Franc Arnold, founded “Radsport Arnold”: a company supplying bicycle parts. In 1996, they started making their first bicycles using the name Canyon, but the Canyon Bicycles company itself wouldn’t actually be founded until 2002.

Although they certainly are a recognizable brand, that doesn’t mean that the bikes they make are going to always arrive completely problem-free.

What Products Does Canyon Sell?

If you’re looking for any specific kind of bicycle, it’s likely that there will be a Canyon for you. They sell a wide variety, and they produce a large number of accessories and equipment besides.

They are one of the most popular bike manufacturers in the industry and they sell their products all over the world.

You can even get your brand-new bicycle shipped to your door, although this does mean that you won’t get to check for any issues before you open the box.

At Canyon, you can buy:

So, you are probably going to find what you need, but are you going to have any issues when you get it home?

Let’s take a look at some of the most significant recurring problems that customers find with bikes from Canyon.

Canyon Bikes have a pretty poor reputation when it comes to their customer service. In fact, things were so bad a few years ago that the founder and CEO even issued an official apology regarding the issue in February 2016.

While they have definitely improved since it doesn’t seem to have resulted in an end to all of their support problems. Some customers still complain about a lack of responsiveness and inconsistent or bad advice from Canyon.

Things do seem to be much better now overall, though, and many people feel like their problems are resolved quickly and helpfully.

However, there are still a few reports of having to send multiple emails and make multiple calls just to be told that there’s nothing Canyon can do.

Since around 2020, reports from customers about the quality control over at Canyon have been a little troubling. People have found scratches, dents, and nicks on their bikes when they get them out of the box, and sometimes even more serious damage as well.

These problems seem to have become more prevalent over the pandemic, when a lot of companies faced major disruptions to manufacturing, staffing, and supply lines.

It is possible that this kind of damage occurs during shipping, so it might not all be on Canyon’s side.

Quite a few Canyon customers have reported problems with the frames on their brand-new bikes, which range from poor-quality finishing to misalignment. As the frame is very much the body of the bike itself, you want it to be in the best possible condition out of the box.

This also seems to be related to lower quality control standards over the last few years, because reports of this kind have increased alongside mentions of minor damage.

Something else to watch out for when you get a Canyon bike delivered is exactly what arrives in the box. As a large company that ships a huge number of bikes every day, there are bound to be a few errors along the way and quite a few people do report having been given the wrong parts or having parts missing.

This can be due to certain things being out-of-stock and replaced with an incompatible alternative, but it also seems like key components are sometimes just forgotten about.

For most of these kinds of complaints, however, Canyon is generally pretty quick to respond and replace what you need.

What Is The Canyon Bikes Warranty?

Although there are certainly issues with their customer service, Canyon Bikes do actually come with a decent warranty.

All Canyon-engineered parts are covered for material and processing defects for 2 years, and they also offer a 6-year guarantee on all of their frames, seatposts, cockpits, and forks – for racing, triathlon, and commuter bikes.

For the batteries in their E-Bikes, you also get a 2-year warranty, and all of their guarantees and warranties are independent of the owner. This means that you can still claim on a second-hand model.

With that being said, you do need to get in touch and your claim will need to be approved. Canyon’s history when it comes to customer service does make this warranty and guarantee a little less reassuring, but most people report positive experiences over the last couple of years.

Are you likely to have problems with a Canyon Bike? Overall, they have a pretty good reputation in the industry for performance and most people are very happy with the bikes that they receive.

With that being said, there are a few common issues that arise with Canyon Bikes, and quality control does seem to have dropped over the pandemic

Unfortunately, when it comes to customer service, Canyon’s reputation has not been so good in the past. While the majority of users now say that things are much better, some people do still struggle to get their issues resolved.

Do you know what Canyon bike return policy is? Well, you are at the perfect place to find the answer to such a question. Canyon Bike adds innovative flair to the world of personal transportation,...