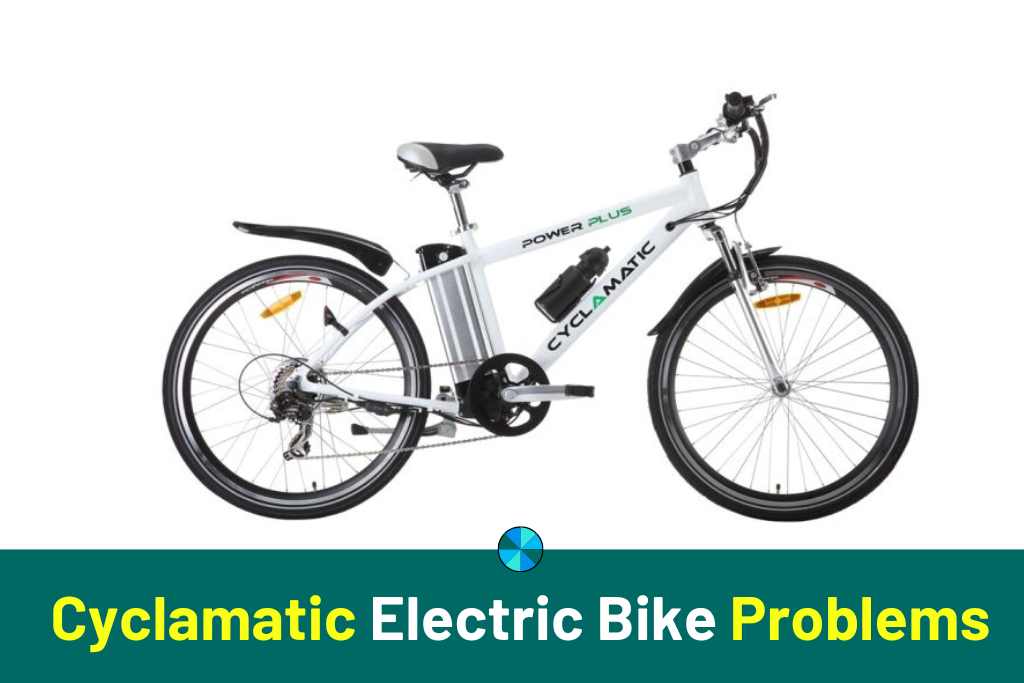 Do you know what Cyclamatic electric bike problems are? Well, you are at the perfect place to find the answer to such a question.

Cyclamatic electric bikes are a popular choice for those looking for an affordable and environmentally friendly way to get around. However, there are a few common problems that can arise when using these bikes.

One issue is that the battery may not last as long as expected, leaving the rider stranded. Another problem is that the bike may not be able to travel as fast or as far as advertised. Additionally, the bike may be difficult to put together, and parts may break easily.

Despite these potential issues, Cyclamatic electric bikes are still a great option for those looking for an alternative to traditional bicycles. With a little care and maintenance, these bikes can provide years of enjoyable riding.

Cyclamatic promises that their electric bike battery will last for up to 500 full charges. However, many users have found that the battery doesn’t seem to hold a charge as well as it should.

After just a few months of use, the battery may only last for a few hours before needing to be recharged.

This can be extremely frustrating, especially if you’re in the middle of a long ride and the battery dies. While Cyclamatic does offer a warranty on their products, it doesn’t seem to cover this particular issue.

As a result, many customers are left feeling disappointed and frustrated with the product.

Read also >> How Long Does a Bike Cassette Last? (What To Expect)

The Cyclamatic Electric Bike is a popular mode of transportation, but it has a common problem: it won’t travel as fast as advertised.

Many users have complained that the bike only reaches speeds of around 15 miles per hour, regardless of how much pedal power is applied.

This can be frustrating for those who were expecting to reach the 20-mile-per-hour top speed that is advertised. There are a few possible explanations for this discrepancy.

First, the bike may not be properly calibrated.

Secondly, the battery may not be providing enough power.

Third, there may be something interfering with the bike’s gears or wheels. Whatever the cause, this problem can be a major inconvenience for Cyclamatic Electric Bike owners.

One common problem that Cyclamatic electric bike riders may experience is that the bike doesn’t travel as far as advertised.

There are a few potential reasons for this. First, if the battery isn’t properly charged, the bike won’t go as far. Make sure to charge the battery according to the instructions in the manual.

Second, the terrain can make a big difference in how far the bike will go. If you’re riding on hilly or rocky terrain, the bike will have to work harder and won’t go as far.

Third, if you’re carrying a lot of weight, the bike may not be able to go as far. The weight of the rider and any cargo should be within the weight limit for the bike.

With a little troubleshooting, you should be able to get back on track and enjoy your ride.

4. Cyclamatic Electric Bike can be difficult to put together

One of the most common problems reported with the Cyclamatic electric bike is that it can be difficult to put together.

The main culprit seems to be the instruction manual, which is often vague and confusing. In some cases, it’s even missing critical steps.

As a result, many people find themselves struggling to put the bike together correctly, which can lead to frustration and even give up altogether. If you’re having difficulty putting your

bike together, there are a few things you can do to try and simplify the process. First, make sure you have all of the necessary tools and parts on hand.

Second, take your time and follow the instructions carefully. And finally, if all else fails, there’s no shame in reaching out to customer service for help.

Cyclamatic bikes have been a popular choice for those looking for an electric bike. However, there have been some complaints about the lack of throttle mode.

This means that you have to be peddling in order to get the bike moving.

However, many riders have found that they can get used to pedaling and that the lack of throttle mode is not a major issue.

If you’re considering purchasing a Cyclamatic bike, be sure to test it out first to see if it’s the right choice for you.

A common problem with their bike battery chargers is that the indicator light is not reliable. When the light is on, it means that the charger is working and the battery is charging.

However, if the light is off, it could mean that the charger is not working or that the battery is fully charged.

If the light is off but the battery starts to charge, then the charger is working.

If the light is on but the battery doesn’t start to charge, then the charger isn’t working and you should contact Cyclamatic customer service for a replacement.

For a low-cost and eco-friendly mode of transportation, many people choose cyclamatic electric bikes. There are, however, some issues that frequently arise when riding these bikes.

The rider could be in trouble if the battery doesn’t last as long as predicted. Furthermore, there’s a chance that the bike can’t actually go as quickly or as far as it says it can.

The bike could be complicated to assemble and prone to breaking.

VIEW POST
link to How Long Does a Bike Cassette Last? (What To Expect)

Do you know how long a bike cassette lasts? Well, you are at the perfect place to find the answer to such a question. The cassette is a marvelous little piece of engineering. It would be one thing...