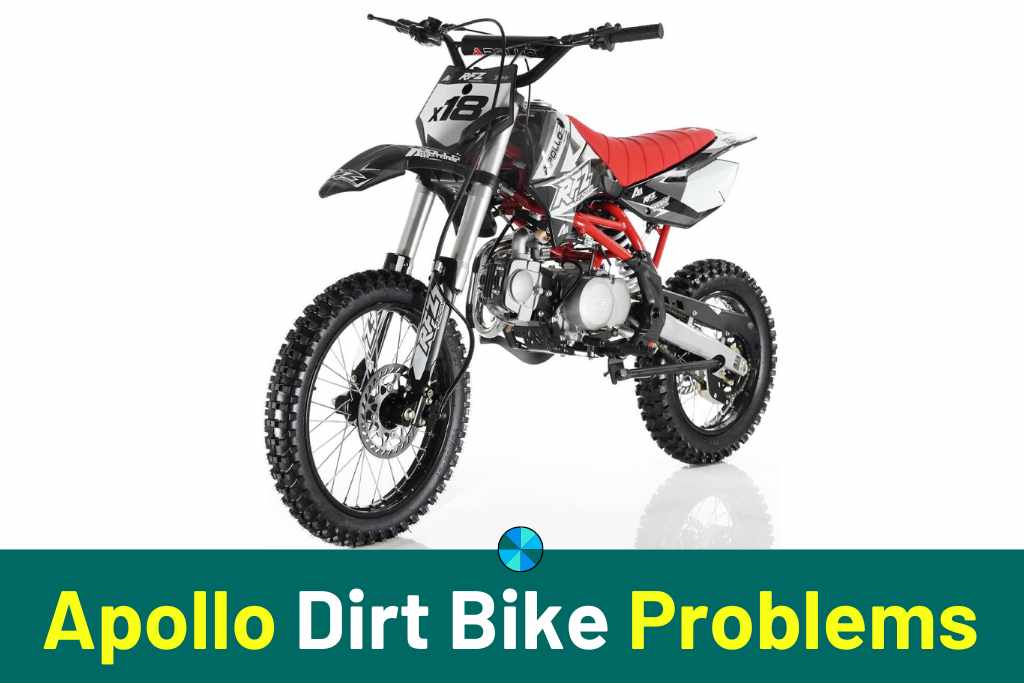 Affordable Chinese-produced dirt bikes are bashed as being low-quality products you should steer away from. Very often such criticism is based on facts but deserves some caveats. So, let’s talk about 10 common problems with Apollo dirt bikes.

The most common problems with Apollo dirt bikes are related to the quality of materials and workmanship which are not as refined as those of some more established brands. This is not to say that they are particularly unreliable.

They are entry-level affordable dirt bikes, and not competition-grade pro models, so expectations should be scaled appropriately.

Apollo dirt bikes are made by Zhejiang Apollo Sports Technology, a design and manufacturing company oriented toward the international markets for motorcycles, ATVs, electric bikes and scooters, and assorted recreational vehicles.

The company was started in 2003 as a manufacturer of plastic household items and plastic furnishings for other companies.

Today, they have facilities for the production of almost all motorcycle parts, but most importantly have frames production and full assembly lines.

Annually, they are able to produce up to 200,000 units and ship them to more than 60 countries around the world.

In North America, they are present through their Apollo Motors USA subsidiary.

The most common problem with Apollo dirt bikes are the buyers’ expectations and buyer’s remorse. One thing that you should be aware of before you purchase one of them is that they just can’t be as robust as professional racing dirt bikes.

It’s impossible for them to be of that kind of quality at those prices.

They are sturdy and reliable enough for the purpose they are built for but don’t expect them to take a lot of beating.

They also have a fairly simple design, so when something goes bad with any of the parts, they can be replaced easily and affordably.

Most of the components are made of materials that are not the highest grade available. For example, many people are reporting cracked frames very early in the ownership.

And you can be certain that this is not due to some manufacturing defects, but from pushing these bikes beyond their limits.

Soft steel and aluminum alloys are cheaper than harder ones, and these bikes are not intended for making big airs.

So, the materials are just good enough.

On various components that will be delivered to you already assembled, you will very often notice that they are rounded to a lower or higher degree.

It is a cost-saving measure to use softer, non-hardened nuts and bolts.

But, another problem, which exists from the effort to make these bikes as affordable as possible is the lack of any kind of thread locking compound.

So, there are considerable chances of a bike starting to literally fall apart unless this was dealt with.

But more often a bad stator can make the engine shut down at high revs after it gets up to working temperature. Fortunately, replacement parts are very affordable.

The component that is very likely to fail on you is the CDI module of the ignition. Its failure will lead to the inability to start the engine in any way or manner.

Not even the push start will work. The simple fact is that the CDI module is just a low-quality one and can’t withstand many uses.

Because of the lower quality steel used in its construction, the engine is not very fond of high temps and high revs for a long time.

If you like to gun the engine it will very easily seize up. Another common problem is the hydro-locking of the engine.

And this happens very often because of the failed carburetor valve, and not the engine itself.

Apollo bikes are made for fun but reasonable riding over rough terrain. They are not intended for big jumps and hard drops.

To make them quickly and cheaply, parts that need to be welded are done so somewhat quick and dirty. If you get rough with one of these bikes, it is not unusual that a weld fails.

When it comes to the quality of putting these bikes together, they are not always done so quite properly.

Most often the problems are nuts and bolts that are not properly torqued or are overtightened. Sometimes they are tightened in a clumsy way and combined with soft material could be completely rounded.

Sometimes it can happen that your Apollo bike just refuses to shift above the second gear. While this sounds like a major problem requiring the replacement or rebuilding of the transmission, it is a much less serious problem.

The clutch is not properly adjusted, and the barrel adjuster needs to be played with a bit.

Carburetor fouling is very common and starts very early in the life of Apollo dirt bikes. The most common problem is the failure of the carburetor valve, which is caused by a faulty float needle.

This leads to gas overflow of the carburetor bowl and filling up of the cylinder with gas. In other words, to the hydro lock of the engine.

Whether people are just riding the Apollo bikes in too dusty conditions or the air filters on them are extremely poor quality is anyone’s guess.

But the fact is that they get fouled very quickly and the OEM parts do not last very long.

Problems With My Apollo Pit bike >> Check out the video below:

Among the general public, there are a lot of negative attitudes toward dirt bikes made in China. For some people, these 10 common problems with Apollo dirt bikes will be confirmation of their presumptions.

But the reality is that these problems only show that affordability can’t come with the expectation of premium quality.

Apollo bikes are simply constructed and cheap to repair, but they can’t withstand the abuse that they are not made for.

link to 6 Common Problems With Glamour Bikes (What To Expect)

We all who own bikes occasionally experience issues with our vehicles. While some are small, others might leave us trapped on the sides of the road.  6 common problems with Glamour...

If you’re looking to get your hands on a new trials bike then you will definitely have been thinking about some of the exciting options that Vertigo have to offer, but are their bikes as good as...