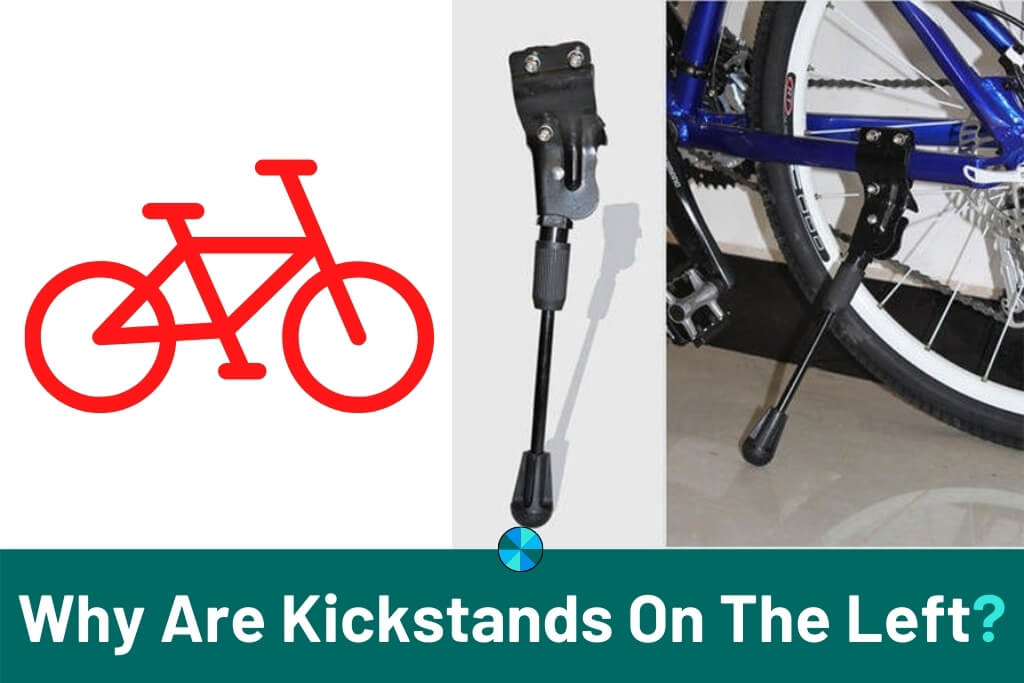 If you look at a bike with a kickstand or sidestand on it, then you will find that they will all have the kickstand on the left side of the bike. Have you ever wondered why this is? Well, that is what we want to take a look at on this page.

The History of Mounting

To understand why the kickstand is on the left of the bike, we actually have to look to a time before bicycles were invented. Centuries before, in fact.

Think back to a time when we still riding horses into battle, where unless we were going to be mercilessly slaughtered the second we headed onto the battlefield, we would have a sword in tow.

Most people are right-handed. This means that as they were mounting the horse, the sword would be mounted on the left-hand side of their body.

This would allow it to easily be drawn with the right hand. Now, we are sure that you have never wielded a sword but, if you have, then you will notice that they are incredibly heavy.

The last thing you really want to be doing is to have a leg with a massive sword attached to it as your leading leg.

This just causes way too much hassle. You are spending more energy than you need to before you head onto the battlefield.

From that point on, even if you were not wielding a sword, you would always tend to mount a horse from the left.

This is because most people are right-handed. It was really a subconscious decision for people to start mounting their horses this way.

So, what did people do when they were left-handed back then? Well, they kept it hidden! More on that in the next section, though.

Read: Where Are Surly Bikes Made? What You Need To Know

The History of Kickstands When it Comes to Bikes

The first thing that can be reasonably considered a bike was invented in 1817.

The very first kickstand was invented in 1869. Is this important to why kickstands are on the left of the bike? Surprisingly, yes.

If you know your religious history, then you will know that back when bikes were invented, it was seen as ‘wrong’ to be left-handed. In fact, it wasn’t just wrong, it was a sin.

Anybody that was left-handed was said to have the devil living inside of them. Seriously.

This means that kickstands and bikes could never be designed for those that were left-handed because anybody that was left-handed was keeping it well-hidden.

Thankfully, times have since moved on.

Nowadays, people are more than happy to state that they are left-handed. However, the population that is right-handed still sits somewhere around the 70% mark. You have to design products for the majority.

If you are right-handed and own a bike, then we urge you to try and get on it approaching from the right side at some point.

While you may be able to manage it, it will probably be a lot more difficult than with your right leg.

This is because your left leg is going to be a bit weaker, and your brain will not be wired in the ‘correct’ way to move it high.

This will mean that you have to expend a lot more energy to get your leg over the bike.

Honestly, you are about to go out on a long bike ride, why would you want to want to spend extra energy doing something that you could quite easily do with the other leg?

Busting Myths About The Mounting of Sidestands on Bikes

A lot of people swear that the kickstand is on the left side of the bike because the bike leans naturally left. This is not the case.

In an ideal world, the bike would be perfectly balanced. If your bike leans naturally left, then this is probably because when you are dismounting (with the leading right leg), you are knocking the bike slightly to the left. Thankfully, that kickstand should stop it from toppling over.

If your bike was meant to lean naturally in one direction, then it would be more likely to lean to the right, as there will normally be a lot more attached to the right side.

This is the way that bikes have been designed since manufacturers know that kickstands are probably going to be on the left side of the bike.

Note: we do not advocate that you knock your bike over to test this theory!

We can assure you that your bike will be unlikely to lean naturally left and, if it does, it is probably something that you are doing to the bike or there may be something wrong with the bike.

Can You Put The Kickstand on The Right Side of the Bike?

With this in mind, you may now be wondering whether it is possible to move a kickstand onto the right-hand side of the bike? That would be better for lefthanded riders, yes?

Well, the truth is; probably not.

You have to remember that bikes have been built to accommodate kickstands on the left-hand side of the bike.

This means that a lot of bits and pieces have been put on the right-hand side. If you put a sidestand on that side of the bike, then the sidestand would interfere with a few of these mechanisms.

We are not saying that you can never attach a kickstand to the right side of the bike, it is just going to be unlikely with the vast majority of bicycles.

Does Having a Kickstand Weaken the Bike Frame?

Before we wrap up, we want to bust one myth about kickstands, since we are talking about them.

We noticed that a lot of people seem to believe that having a kickstand installed will weaken the bike frame.

We suppose that this is a theory that could make sense. After all, putting a bolt or a weld onto the bike frame could feasibly weaken it.

However, there seems to be no evidence that attaching a kickstand is bad for the frame. If it does weaken it, it won’t be by all that much.

The only real issue you will have with a kickstand is an increase in wind resistance, which will slow you down by a small amount.

However, to be honest, this is not a problem that most people will be fussed about. After all, many people that are cycling are not really fussed about getting an extra 0.25mph out of their biking.

The kickstand is going to increase wind resistance by so little that it isn’t worth thinking about.

So, there you have it. Side stands are on the left side of a bike due to things that happened centuries and centuries ago.

They remain this way because most people find it easier to approach the bike from the left-hand side.

It is rare that you will be able to mount a kickstand on the right side of the bike due to the way they have been designed.

link to What Is A 10 Speed Bike? (Simply Explained!)

Found yourself wondering about 10 speed bike? Fancy getting your hands on one yourself? Then you're in the right place! You can probably gather that a 10-speed bike has 10 different resistance...

People aks, if BMX bikes are good for commuting? Commuting can be tricky. Queues, trains, subways, and everything in between get tiring very quickly. But riding to work on a bike can...