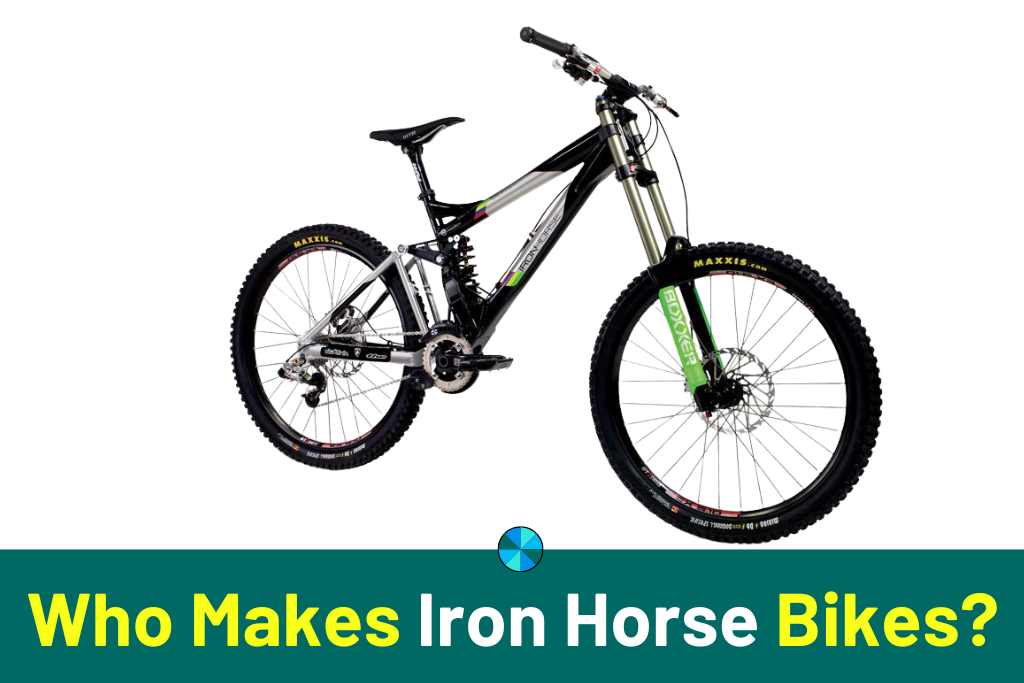 Iron Horse Bicycles hailed from Islandia, New York; and could boast with riders that have won three UCI Downhill Mountain bike World Championships. Their portfolio is made of racing and mountain bikes but focused on the downhill and freeride models. But who makes Iron Horse Bikes?

Today, no one is making them. Unfortunately, Iron Horse Bicycles are not produced since 2009 when the company filed for bankruptcy and was sold to Dorel Industries.

But, that’s just part of the story, so let’s dive into the details.

Who are Iron Horse Bicycles?

Iron Horse Bicycles were founded in Islandia, New York, back in 1987, a bikes manufacturer well known for its logo with a prancing black horse on a mustard yellow shield.

Their stable of riders was made of names such as UCI Downhill Mountainbike World Championship winners Dave Cullinan and Sam Hill.

Until 2009 they were known for high-quality competitive and recreational bikes made with some of the best techs on the market and sold at a reasonable price point.

Unfortunately, in 2009 they were forced to file for bankruptcy and their assets were bought by Dorel Industries. Since then, Iron Horse Bicycles have ceased all operations.

Since 2009 actually no one is making Iron Horse bikes. The original manufacturer, Iron horse Bicycles has declared bankruptcy and got bought by Dorel Industries.

When Dorel bought all Iron Horse assets, a certain stock of bikes and parts was acquired by them. That stock was then sold by Dorel’s then sub-brand, Pacific Cycles.

The scheme was very short-lived, as the acquired stock was not very big, to begin with, and many brand-loyal customers were in a hurry to get their hands on spares.

Who are Dorel Industries?

Dorel Industries Inc is a Canadian company headquartered in Montreal, Quebec, which had three divisions specialized in design and manufacture in separate segments, juvenile products, bikes, and home furniture.

Dorel Sports division is the parent entity of several bicycle-related brands they have acquired over the years. Pacific Cycle is one of them and is a company specializing in designing and distributing branded bikes.

Besides them, other brands include Caloi, Cannondale, Schwinn, GT Bicycles, Mongoose, and many others.

In 2021 Dorel Sports was sold to Pon Holdings of Netherlands.

Iron Horse always had a reputation as a solid brand. They produced a large number of professional racing mountain bikes and a few pro cycling road bikes. But besides the competition models, they also had some outstanding entry-level models.

These models for years had a reputation for being the best entry-level models.

One of the best characteristics of Iron Horse bikes always was the price-quality relation. No matter the price point of some model, it was made out of the best possible components.

In the end, such practice really cut their profit margins, leading to the eventual demise of the company.

Quite a large number of Iron Horse bikes have survived longer than the company that made them, and that is not by accident or without their owners actively trying to destroy them.

But nothing less should you expect from bikes made to be aggressively driven over extremely tough terrain.

What was unusual about these bikes that their level of durability you got at those price points. The frames were built from some of the toughest, but still, light alloys and comparable bikes were always with 2-3 times higher prices.

The smoothness and durability of the DW-link suspension system were for a long time unmatched by other companies. Until they have started licensing the DW-link design too.

What everyone likes about DW-link suspension is the smoothing of pedaling, especially on rough terrain. Though it does have certain disadvantages in some other use scenarios.

One of the goals of the company was always to make a bike that is not completely specialized for just one surface or one type of ride.

Especially when it comes to their consumer-grade models. The adaptability and ease of adjusting them for various surfaces were liked by many customers.

Cross-country mountain bikes made by Iron Horse, such as the Phoenix model are the best example of what a flexible bike should be.

The Iron Horse bicycles were always much more affordable than the comparable models coming from their competitors. Granted, not many of them were ever under $400, but they were worth every penny.

Even today on the second-hand market, their price-quality ratio is just unmatched. But beware, there are many knock-off offerings out there.

As I’ve said above, Iron Horse’s demise probably was, at least in part due to very favorable pricing and low-profit margins. While this was great for customers, it was not for the company’s bottom line in the long run.

The most iconic Iron Horse Bicycles’ model was the Sunday, downhill bike on which Dave Weagle designed DW-link suspension debuted.

Who remembers those days of downhill biking, they remember a legendary duo, Sam Hill and Iron Horse Sunday.

Where to buy an Iron Horse bike?

As the Iron Horse bikes are not being produced since 2009, there are not many places where you can buy them. The second-hand market is the only place where you will find them.

So, places like eBay, and dedicated Facebook groups are the best and quickest way to get an Iron Horse bike.

But be careful, there are fake Iron Horse bikes, and they are not so hard to recognize. The Company logo on the frame features a silver shield instead of the original mustard yellow.

Who makes Iron Horse bikes is the question many novice mountain bikers ask when they start hearing about this brand. Unfortunately, since 2009 they are not being produced.

Due to debts, the company declared bankruptcy, and its assets were sold off. So, these bikes today you can find only on second-hand markets.

Do you know what Costco's bike return policy is? Well, you are at the perfect place to find the answer to such a question. Children's bikes, adult bikes, exercise bikes, and electric bikes are all...